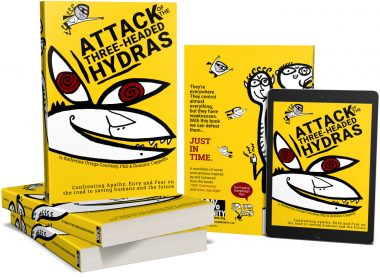 GET YOUR FREE CHAPTER

It’s evolution time, and the hydras extinction depends on you. How? Let the authors take you on one wild ride. You’ll laugh and cry — but mostly you’ll get really pissed off at the mess we are in, brought to you by the three-headed hydras of Apathy, Envy and Fear. Yes, they are everywhere but we can’t afford to lose this battle. The pandemic and economic free fall just removed the term “innocent bystander” from the language. Bottom line: You’re either a hydra or a hero in the revolution. Choose which.

Try out a chapter (aka episode) of Attack of the Three-Headed Hydras to see why everyone who picks up with book loves it. Remember, it’s even better when you hold it in your hand!

Please note that the version below does not have the same layout or visual detail as the printed book.

Waking up on the planet of three-headed hydras

Waking up to a very new reality.
No one can explain how it happened but here you are, waking up to life on a planet where three-headed hydras in tailored suits run almost everything. You aren’t sure if it’s a nightmare, an extended hallucination or some quirky time travel/parallel universe situation seen in your favorite sci-fi movies. But, the reality is that everything is the same in your world except that nobody seems to find anything unusual about eight-foot-tall, three-headed hydras existing among us. Suddenly you can see them but other humans can’t or just don’t care.

And when we say that they run almost everything, we mean every-thing. Giant hydras appear to be in charge of Fortune 500 companies, city hall, the police department and your news streams. When your eyes were first opened to them, you were, naturally, shocked by the hydras as much as by the total normality in which everyone went about life in deference to them. If this were a Netflix series, it would have taken three episodes into the ten-episode season for the hero to realize that:

Apathy, Envy and Fear are everywhere.

Figuring out the hydras

It didn’t take long for you to figure out the modes of operation for each of the three heads.

Head #1 is called Apathy, always well groomed, polite, smooth talking and completely disingenuous—all the traits of a sociopath. The status quo is working great for them, and they have no interest in changing it.

Head #2 is known as Envy and has the qualities of a viper, rarely speaks but watches every detail closely with penetrating x-ray-like eyes. Envy assesses everyone and needs you to be cowed at all times. Hell hath no fury like Envy discovering someone’s hot tub is bigger than his. Or worse, someone else getting credit or kudos for good work.

Head #3 is known as Fear, a toxic presence with a bloated face, resembling everyone’s least favorite boss and can, if provoked, get pretty dangerous—ranting, screaming and occasionally vomiting up bile. Fear is completely irrational yet somehow manages to hold it together thanks to the telepathic support of Apathy and Envy. Fear has managed to build a system of homeostasis, and anything that might disrupt their perfect system must be stopped.

The three heads work collectively and do their best to keep society rolling and the humans doing their jobs, spending money and accepting orders without question. At any encounter with a hydra, listening to three heads spinning tales of half-truths and outright lies, one always leaves disoriented, disempowered and destabilized. Hydra-syndrome is also contagious. Spend too much time around them, and you might turn into one yourself.

Just when you were almost used to the hydras and accepting of the fact that they were essentially our overlords, there was a cataclysmic event in the form of a global pandemic. A deadly virus was hopping all over the world. Government leaders, following prudent public health policy, told everyone to work from home. This worked for those lucky enough to have jobs where that was possible. Others depended on government subsidies and the kindness of friends and families.

A few months into this new way of living, kids, teens, parents, grandparents and everyone else started to go a little stir crazy. Then government subsidies ended and desperation grew. School morphed into something not quite school while other educational services, like colleges, struggled to operate effectively and determine which jobs they were now supposed to be training people for since the pandemic tossed everything up in the air.

Meanwhile, advances in artificial intelligence and robotics suddenly looked even more attractive to hydra CEOs. After all, robots don’t get sick. This meant that the conversion of jobs once done by humans (from call center staff, to therapists, to educators) into automated computerized systems went into overdrive. Suddenly, calling almost any business meant a chat with a chipper, all-knowing machine. This only added to the growing fear of permanent massive layoffs in once reliable jobs throughout the private and public sectors.

Suddenly, people started talking to their neighbors and through social media about how badly everything was being run. With everything falling apart around them, many began questioning why those in charge were in those positions, regardless of whether they could see their true hydra forms or not. This was, quite literally, revolutionary.

And so, here you are. Stuck on planet earth with three-headed hydras desperately clinging to power, an unpredictable virus still spreading, a nationwide lack of medical care and an unshakable fear of more viruses and upheavals to come. Jobs and businesses disappearing, many never to return, and an absence of any economic development plans. Services to help people survive and thrive are spotty at best.

More and more streaming news shows and vlogs, produced by newly-awakened humans, create viral news stories with headlines like “hydra exposed by whistleblower,” finding that calling out hydras exposes their true form to others. Soon, the majority realizes they are overrun with hydras in charge of everything that is broken. Brave humans call for resistance, branding the fight as: “Heroes vs Hydras.” Some even look to a bright future, predicting that the hydras will soon go the way of the dinosaurs.

Yet, anything can happen in a world where three-headed hydras, when threatened, use their considerable power to influence every part of business, governments, the tech world, and the infotainment industrial complex. Will they win? Will they lose? Or, will they pretend to lose while surreptitiously keeping control?

Yes, the future is uncertain. But, hydras are easy to spot once you know what to look for. Defeating them will take resistance, resilience and coordination. We know how to make it happen. Read on…

Tales from the Battlefield: Katherine and Dom’s Report

We were invited to one of those “let’s get out of here” quick latte breaks by what we thought was another human, a new colleague in a new organization we were collaborating with. As she over-shared about her troubled teen years that fueled her desire to do better than the “losers” (her term) and allowed her to fund a McMansion remodeling, a hot tub and her husband’s collection of antiques, something inside our heads clicked: “Get ready, right as your lattes arrive she will sprout three heads, ruining a tasty treat.” You know the feeling. There was something off about this person with a smile far too wide for a human face. She would soon emerge as our nemesis, the uber-hydra with writhing heads of Apathy, Envy and Fear unmatched by any we had ever encountered before. It would take every ounce of courage, cunning and creativity to overcome her and her far-reaching scaly and oozing appendages. Ultimately, we did win the battle, but not without huge costs and scars. This corrupt hydra’s weakness was her total incompetence. 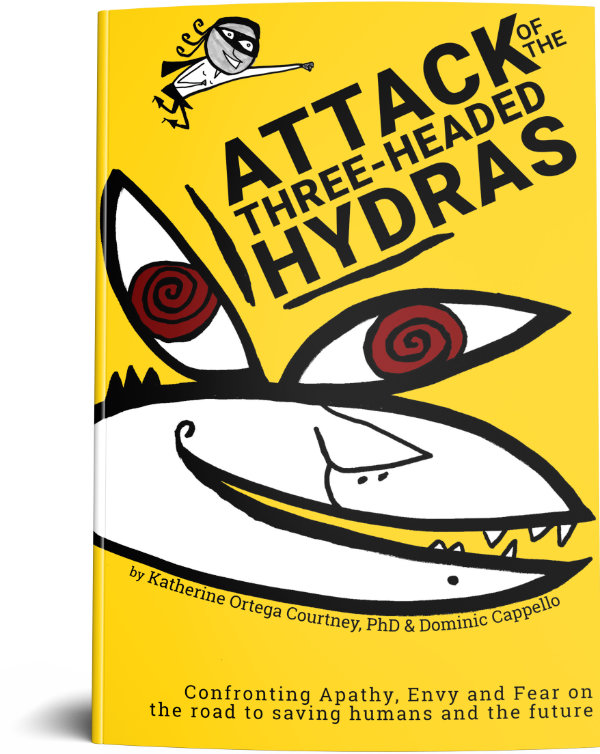